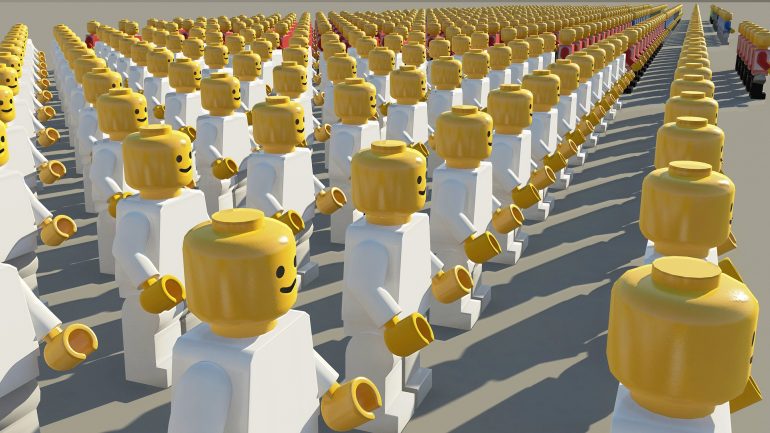 There are so many steps involved in learning how to think like a programmer. For a beginner, what’s important is not the specifics of a language (called the syntax). Rather it’s better to understand the commonalities between languages which are the building blocks of any programming language. These LEGO mazes, which can be solved with “code” using paper rather than a computer, illustrate 4 levels of difficulty and include a variety of programming concepts. While these Levels will be described in more detail below, here is a quick overview:

Level 1: The child can see the specific problem at hand and step by step walk their LEGO figure out of the maze. Like the game Robot Turtles, this easiest level teaches the child to think from a point of reference different than their own. The child’s left may not be the same as the figure-in-the-maze’s left, but even the youngest kids can learn this valuable skill of switching reference frame.

Level 2: Hopefully, by the time they’ve mastered Level 1, your child will realize that it’s a bit tedious to tell the character to move forward 7 times in a row. Rather, it would be handy to just have a way to say “Do this next command 7 times.” This level introduces the concept of “for loops.”

Level 3: Older children might be ambitious enough at this point to realize that an awful lot of work goes into solving a specific maze using the method of Levels 1 and 2. With the introduction of “while loops” and “if statements”, kids can challenge themselves to write as short a program as possible to solve a specific maze. The programmer just needs to consider all possibilities at any random location for their LEGO figure and decide the best generic sequence of actions. For example, what should the character do if there’s an opening to their left? What if they’ve hit a dead end?

Level 4: While kids will hopefully experience success in Level 3, they will likely find that if they try to use their code on a different maze, it may not work. It’s possible that their figure will get stuck in what programmers call an “infinite loop”, repeating the same behaviour over and over again without being able to escape. By introducing a random number generator, older kids can write a program that can get their figure out of any maze.

At the end of this process, the most mature pupils will realise that it would be great if their LEGO figure could remember where he had already been so that he could systematically cover ground instead of seeming to wander aimlessly. This could motivate a discussion of more advanced programming concepts such as memory and stored variables.

Age Range: KS1 /FP and KS2
Time Required: 1 hour if laminating
Difficulty: Easy to prepare, Level 3 and 4 challenges may only be appropriate for KS2
Cost: Free printable, less than £2 to laminate (does not include cost of LEGO or DUPLO bricks which are optional) Don’t forget to check out all the amazing posts in the 28 Days of Hands-On STEM Activities for lots more ideas to get your kids interested in these wonderful fields! If you thought this post was useful, please consider subscribing to my newsletter(and receive access to exclusive, free, educational printables)!