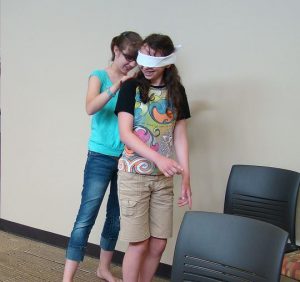 This is best done outside in the yard and works best with 6-8 yr olds Divide the class into groups of about 5.  One person in each group is chosen as the robot and is blindfolded.  Another is the programmer (or choose two and let them take it in turns). The rest are going to record the program.  Chalk a shape (square, circle, triangle etc) on the yard for each group, big enough for a child to stand in. These should be randomly placed in the yard and at least 10- 15 metres from the group.  Give the blindfolded ‘robot’ a quick spin so they cannot tell in which direction they are facing. The programmers have to direct their robot into their shape. No touching allowed and the rest of the group have to stay at their base.

You may want to restrict the sorts of instructions they can give e.g number of steps , turn, repeat, continue, direction (left or right or in degrees) depending on their age.

The recorders can initially just record the total number of programming steps. With practice, they can write down the actual commands. Or you could make a rule that there can be no further instructions until the previous one has been recorded. After the robot has reached its destination, let the recorders identify the ‘bugs’ and how they could be avoided and also suggest how the number of instructions could be reduced.

You can add to the difficulty by placing soft play ‘obstacles’ in the way for them to negotiate.

Alternatively, spread the groups out equidistantly from a central circle and have a competition to see which group gets their robot there first.  Think of a suitable penalty if two robots collide.