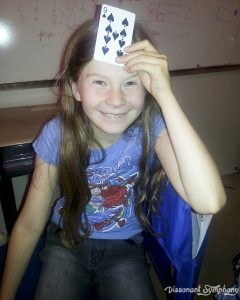 This unplugged game helps children learn about how computers sort and sequence items.

You will need one large playing card for each child.   If you have less than 52 children, take out the picture cards, remove one suit or take out as many cards as you need to but keep the cards in sequence i.e don’t break a ‘run’.

Punch holes in the top and thread about 50cm of elastic through the holes and knot it.  Put one playing card over each child’s head so that the card is on their back facing outwards so that others can see it but they cannot. (Yes, we know – health and safety – hence the elastic but you might have to adapt!)  The important thing is that people do not know what card they have and they are not allowed to tell other people what cards they have on their backs either.

Some teachers say they have done it by just asking the children to hold their card up on their forehead where they can see it (as in the picture) but when we tried that, lots of our children cheated – they could not resist having a peep!

Ask the children to sort out the cards by suit and in rising order.  Make up your own rules to suit the age and ability of the children.  For example, for KS2 tell them there is to be no talking and no touching! For younger children you could allow them to ask questions to be answered by a yes or no or you might allow touching.

Talk to the children afterwards about how they communicated. What information did they need? Did they make up a code or rely on pointing? Is pointing a code? Explain that what they did was similar to how a database orders and sequences items.