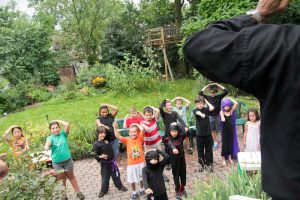 Tell the children that IF Simon says they should do something, THEN they do it ELSE do nothing.

“Simon says put your hands on your head”  (children do action)

“Simon says stand on one leg” (children do action)

Get faster as the game progresses. Teachers decision as to whether children are knocked out if they move when they shouldn’t.

“IF I scratch my nose THEN wave your left hand in the air, ELSE do nothing”

If you are new to the game it helps if you have some commands already written on card so that you can keep the temp op.