This introduction to binary numbers was produced by our partner in Salamanca. You can find resources in Spanish here || Ideas y recursos en español

This lesson introduces some basic concepts about binary numbers to give an understanding of the information codified in digital systems.

In this lesson you should learn what a binary number is and what the concept of bit means for storing information in digital systems. It will raise in a very basic way how to represent the firsts 16 numbers in the binary system.

Aim of the lesson

This lesson is designed to introduce children to the binary system. They should learn what the binary numbers are, how data is stored in a digital system and how they are used to represent information that humans are capable of understanding.

We will need 4 dominoes so that they have 1, 2, 4 and 8 points respectively, as shown in the figure. You will also need a grid which can be downloaded from the resources section at the end of this page. 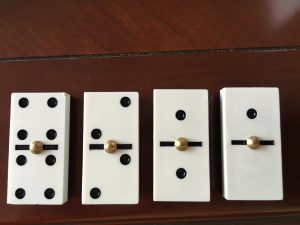 It is also possible to configure a card set so that starting with one that has a point, the following will always have twice as many points of the previous one. Each of the cards represent one bit, so that the number of binary numbers that can be represented is 2n, being n the number of cards made.

A binary digit or bit can only have one of two possible values: 0 or 1.

To this the dominoes should be placed ordered from right to left as shown in the figure, each of the chips will represent a binary digit or bit: 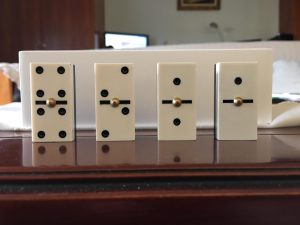 The first detail that should influence whether children are able to perceive how many dots in each tab. If they do not realize themselves, they should be asked how many dots are in each tab?, is there any relationship between the number of points of a tab and the number of points of the tabs on the right and on the left?, how many points should have the following tab located to the left?

Below these tasks are presented:

With the only rules that tabs must always be ordered fewer points higher from right to left and that a tab may be facing, showing their points, or back, so they do not show, they will be representing decimal numbers.

For example, the number 3: 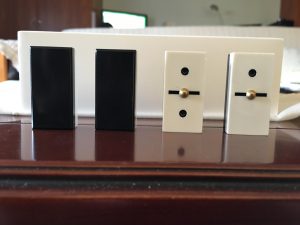 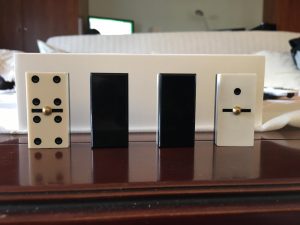 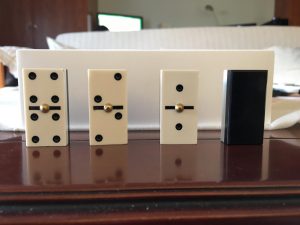 Continue until the children have learned the concept.

When you asked by the smaller number, most likely the answer is 1, which is very interesting to point out that it can also represent the number 0, with every all the dominoes backward. 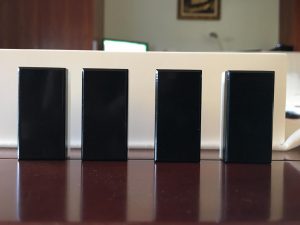 Regarding the question about the greatest number, if children are small the response should be the number resulting from turning all the dominoes face up, i.e. 15. If children know the concept of power you can argue them that the maximum number is resulting from 24-1 = 15, with 4 being the number of tabs, and therefore with n tabs can be represented to the number 2n-1. 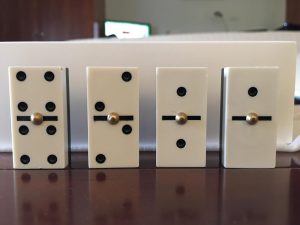 It will also be interesting the answer to how many numbers can be represented question, because a likely response after having answered the highest number is 15. Then if this happens, teacher must correct them and explain that the right solution is 16, reasoning it out and stressing again that may be represented 15 numbers plus 0, i.e. 16 values. If children know the concept of power it can be argued that with 4 tabs will be able to represent 24 values, that is 16 values, ranging from 0 to 24-1, or what is the same from 0 to 15. Generally, with n tabs may be represented 2n values.

With a template, similar to the presented in the Appendix 1, the representation of the binary numbers may be explained. The template will have many cells as binary digits you want working on, in this case we have four dominoes we will use four cells. Another cell is added to write the equivalent decimal number. 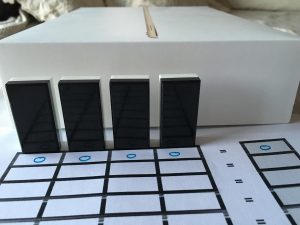 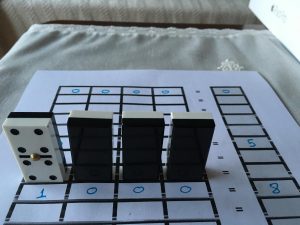 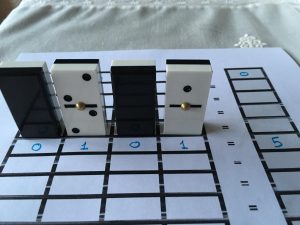 A variant of the above, or complementary exercise, is to represent all numbers from 0 to 15 in binary.

This lesson is based on some of the proposed activities in Bell, T., Witten, I. H., & Fellows, M. (2016). CS Unplugged. An enrichment and extension programme for primary-aged students. Version 3.2.2. New Zealand: University of Canterbury. CS Education Research Group. http://csunplugged.org/books/

Download a template grid as shown in the examples above