Computational thinking is about looking at a problem in a way that a computer can help to solve it. It is increasingly being used as an umbrella term to cover logic, algorithms, decomposition, spotting and using patterns, abstraction and evaluation.

Another way of looking at it is that it is all the thinking you have to do before starting work on a computer. So, firstly, we think about the steps needed to solve a problem (that’s the computational thinking), then, we use technical skills to get the computer working on the problem.

For example, if you’re going to make an animation, you need to start by planning the story and how you’ll shoot it before you can use computer hardware and software, such as Scratch, to create it. 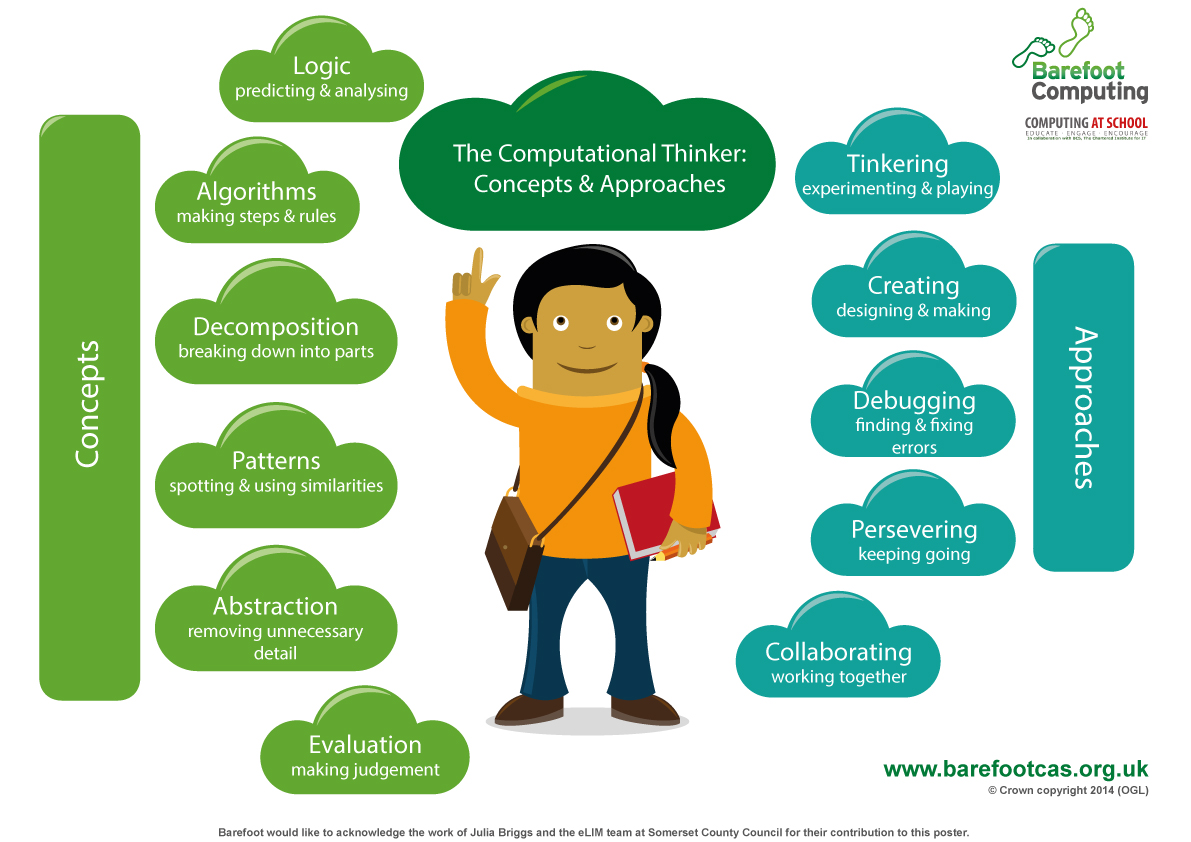 This might be the basis of a discussion with older children if they are familiar with the terminology.  You could give the class or groups of children something to plan – initially this could be something that need not involve a computer, for example, one group could plan a school sports day, another could plan an end of term event for parents, another could plan a school trip.  Firstly, they will all need to break the task down into bits – that’s decomposition.  Then publish the plans as posters and let each group talk through their plans.

Can they talk about what order they would decide things? There may be no right or wrong answers. For example, one group (e.g planning a school trip) could start with the cost, making sure that wherever they went did not cost more than a particular amount per person.  Another group may decide that deciding on the venue was their priority (e.g planning a sports day).  Whatever their logic was, ask them to write it down as a sequence or series of steps. This is the algorithm.

Can they see any similarities? Have all the groups included e.g the place the event is taking place, how they are going to get there, who is involved, how much it will cost, what they are going to eat or drink, how will they tell people etc might be elements of a pattern.  Some of these will apply to all the plans, some might apply to only one or two (e.g “how will they get there?” might not be something they have to plan for a parents’ evening).

The next stage is to write down the information as a chart, stripping out the detail so that they produce an abstraction that might look something like this: 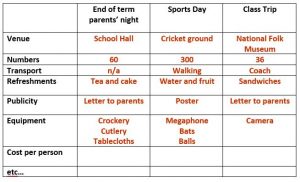 After you have completed this exercise, recap on the main stages. Explain that this is the sort of process that they will need to go through before they try and write a computer program – even highly paid software developers will do this.

There are articles on this website which take each of the concepts in turn and suggest how they can be incorporated in a lesson. Click on the headings below to find out more.