Draw a network in chalk on the yard. Try this one to start. 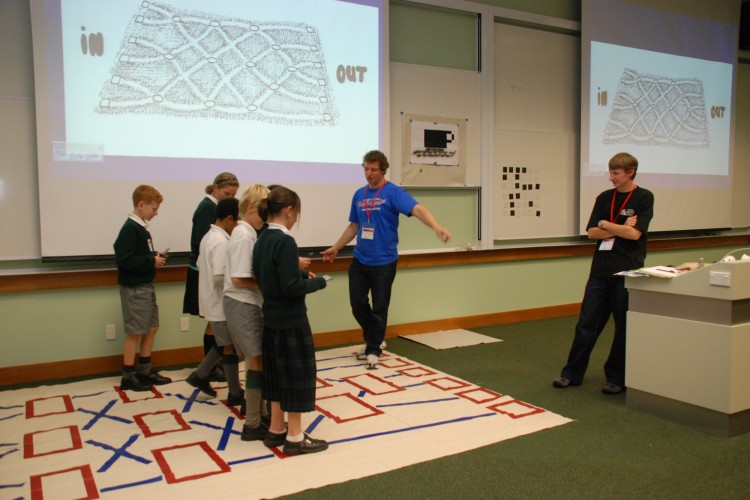 Take 6 children and stand them in the squares on the left hand (IN) side. Give them all a number from 1 to 6 in random order.

At a command they all walk forward to the next node in the network and wait for someone else to arrive. When there are two children in a circle they compare cards. The one with the smaller number takes the exit to their left and the other to their right (it can be helpful if the line to the right is thicker to remind them that the larger number goes that way). When they arrive at the six squares on the right they should have ended up in ascending numerical order of cards.

Once the children have understood the goal and have had a trial run, use a stopwatch to time how long each team takes to get through the network. Now use cards with larger numbers such as the three-digit ones. For older children, make up cards with even larger numbers that will take some effort to compare –  or with words, to be compared alphabetically. The idea is to see which team can get through the network quickest. In the rush it is possible that the numbers will end up unsorted, or that a lone child will be left standing in the middle of the network. In both cases the team has made an error, and must start again.

What happens if the smaller one goes right instead of left and vice versa?” (The numbers will be sorted in reverse order.) Another question for them to try to answer is “does it work if the network is used backwards?” (It will not necessarily work, and the children should be able to find an example of an input that comes out in the wrong order.)

The children can try to design smaller and larger networks. For example, a network that sorts just three numbers, which children should try to come up with on their own.