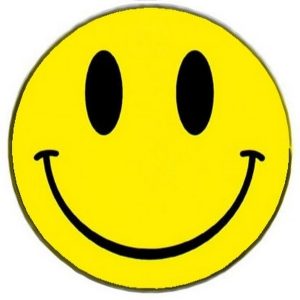 Create a 5 x 5 grid on a piece of laminated card.  Make a smiley face on a disc that will fit in a cell of the grid.   Make another larger disc with the same smiley face on it and laminate.  Arrange 25 pieces of carpet samples, paper (if it’s not windy) mats or similar in the same 5 x 5 grid.  Hide the large smiley face underneath one piece of carpet.  Stick the little smiley face onto the corresponding cell in the grid on the card.

Give one child the card and ask them to stand in front of a partner with their back to them (i.e so that the orientation is the same). Using hand signals only, the person with the card needs to direct their partner to the mat under which the smiley is hidden.

A variation on this game is to hide children’s names instead of Smileys under the carpet grid.  Then you can make several grids on cards and stick one child’s name on each of them. This means you can have several pairs working at the same time or, for maximum chaos, the whole class.

Another variation we tried was to stick pairs of cards randomly under the carpet samples to play human pelmanism.  Exactly the same principle as pelmanism but player one decides which two cards (mats) they want to turn over and programmes player two to get to them.  Next turn they reverse roles.

(Carpet samples are my all–time favourite bit of outdoor kit and shops will usually give you old ones for nothing!)