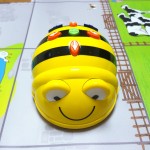 Bee bot is a small, robust robot designed to for younger children. It is a bullet-proof way of introducing the basics of programming at KS1/FP and a great tool for teaching other topics across the curriculum.

How the Beebot works

You input commands, hit the play button and off it goes. The commands are stored in its memory and are run sequentially in the order they are pressed. After the Bee Bot has run its course the inputs are still in the memory, so pressing more commands afterwards will add them to the chain. If we had a chain of commands such as; forward, forward. Then we ran them and after the bee bot came to a stop we pressed back, back then the bot will go; forward, forward, back, back. To clear the memory, hit the ‘x’ button when Bee Bot is stopped. The pause button is used to add a pause into the code of the Bee Bot, not to pause the bot when it is running. So far the only method discovered for stopping the bot when it is running is to turn it over and turn it off and on again.

We found that it was quite helpful to stick down a piece of paper with a line on it to a table or floor. This allowed us to consistently start at the same place and made the maze exercise more consistent.

Getting started with Bee Bot

Let the children play about with the Beebot without any instructions and see what happens.

The Bot is very simple to use and we would suggest that if you are planning to use one,  let children play around with it first. They will pick it up in a few minutes and afterwards you can fill in any gaps in their experience they might be missing. This playing approach to bots is a useful habit to cultivate early – one of the best ways of learning programming is through trial and error and a lot of experienced software developers will say they still spend a lot of their time ‘playing around’.  Experimenting and making mistakes (then identifying them) are really important characteristics of a good programmer.

Writing down a a program then inputting it

This activity is all about getting the pupils to think about what they are inputting before they input the commands in the BeeBot.  Having said that playing is important, children also need to understand that randomly jabbing buttons will mean they will get frustrated and bored with the Bee Bot.

Put the Bee Bot on the table, place a marker or some other kind of object  60 cm in front of the bot. (Each ‘step’ the Bee Bot takes is 15 cm). Ask the pupils what the bot must do in order to get to the marker. Write down what they say on the white board.

After the pupils think they have enough commands to get to the marker, input the commands as they are written on the board into the Bee Bot. Hit play and see what happens. If they get it right then move on to a more difficult task with a few turns in it. If they get it wrong then go through the code with them, manually moving the Bee Bot through each step until they spot the bit that is wrong.

After they have mastered doing it together with you writing it down,  get them to write the instructions down themselves.  Then input them and run the bee bot.  This is effectively getting them to design and write code.  Once they have mastered this, change the code.  So, if they have been using arrows, you could ask them to write the words and vice versa.  Or you could ask them to use coloursThis is an important first step in understanding that programmes can be written in different coding languages.  using whatever symbols or words they want to.

Watch the bot then write down the code

This exercise follows on from the previous one. The goal here is to get the pupils thinking about what commands were given to the Bee Bot to make it behave in the way it did.  Just input commands to the BeeBot yourself and get the children to watch it move through the programme. The ask them to tell you what commands you had given it.  Depending on their age, they can usually only remember about 3 steps so again it is good practice to get them to write down the code as they are watching. ‘Decoding’ is a really useful skill to learn and one which programmers use a lot.

Programme your BeeBot through a maze.

Draw a simple maze on a sheet of paper or even better, go out into the yard and draw one on the floor with chalk. Make sure the ‘steps’ are 15cm.  (One of the absolutely essential tools for teachers using Bee Bots is a piece of stick marked out in 15 cm lengths so that you can design mazes and tracks easily!) If you make your maze so that it has several entry points, you can have several BeeBots at once in the maze and several tracks e.g A to B, red to blue etc.  Children love it when they ‘crash’ – and then they have to negotiate who is going to go around the other.

There is added value in linking the maze to whatever theme you are working on. For example, it could be Red Riding Hood looking for her grandmother’s house or pirates looking for treasure or whatever.  The Bee Bot is very robust and if you use Prittstick or some water proof, kid-safe glue you can dress the Bee Bot up with bits of paper and tissue. The glue will wipe off easily with a damp cloth as long as you don’t actually dunk it in water.

owengray View my other posts