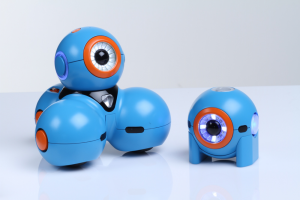 We think these are some of the best robots around for 4-8 year olds and even older children love them. Made by Wonder Workshop, they are controlled by your iPad (or Android) and are exceptionally tough and childproof. Battery life is reasonable – depends what you do but you should get about 45 – 60 minutes on one charge, which is going to be longer than your pupils’ concentration span!

They can also be decorated with stickers, sticky tape, glitter etc without any ill effects and wiped with a damp cloth (no, you can’t throw them in the washing up bowl!)

The full retail price is prohibitive – it ranges from about £140 to over £200. We have never bought one at this price. If you scan ebay everyday, you can usually pick them up brand new for much less. We have bought 5 sets altogether, all from ebay, and have never paid more than £79. 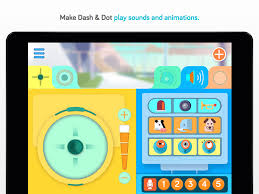 As it says in the video below, you will have to download the free software from App Store or Playstore. The start up software is called Go. This basically allows you to use your tablet as a joystick. You can control the movement of Dash (it has wheels), his head movement, the number of LED that are lit to make his ‘eyes’ and, best of all (according to our pupils), you can choose from a range of very authentic (and horribly loud) noises. This means, for example, you can dress Dash up as a fire engine and make siren noises.

There are a few other functions – such as controlling the modulation of the lights (whether they flash on and off, fade on and off, stay on constantly etc).

Dot has no wheels and sits on a stand. However, you can take it off the stand so that it rolls like a ball. not mobile but can interact with Dash. One of the things the kids like most is the pre-programmed chuckles and grunts and disapproving noises the robots make when they wake up, bump into things etc.

Some children ‘get’ the idea of using a joystick very quickly, especially if they are used to playing online games, flying model aircraft, using remote control cars etc; others (like me) never get it because they are completely incapable of re-orientating themselves relative to the direction of the robot. That is, I’m fine if the iPad joystick AND the front of the robot is pointing forward but when I turn the robot and it’s coming towards me, I am totally incapable of working out that forward is now back, left is right etc. So are most children. 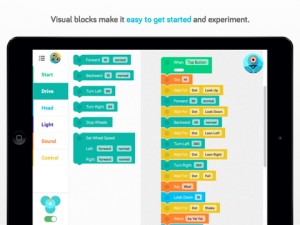 The good news is that there are lots of other programmes you can download for Dash and Dot. For the spatially challenged brigade I recommend leaving the joystick phase asap or even leaving it out altogether and downloading Blockly from the App Store (or Playstore). This is a free programme which enables you to control your robot by dragging and dropping programming ‘blocks’ – very like scratch does. Soooooo much easier!

There are other fun programmes to download; ‘Wonder’ is a sort problem solving app for Dash and Dot, ‘Path’ lets you draw a pathway on your tablet and Dash follows it on the floor and Xylo allows you to create music which Dash can then play if you buy an add on Xylophone for £19. 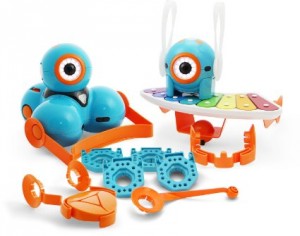 They also come with free add-on bits that enable you to add lego to them and throw a ball. You can also buy a thing to go on the front that looks like a cow-catcher so that Dash can bulldoze things.

The only infuriating downside is that the software seems to be in a constant state of development and every time you switch them on they invariably come up with the message ‘please update software.’ Admittedly, all you have to do is plug the damn thing into your tablet for 10 minutes but it is infuriating when you have a class of 6 year olds raring to go. The moral is obviously plug them in half an hour before you want them and deal with any updates then.