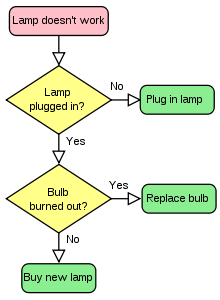 A flowchart is one way of displaying an algorithm.  One advantage of using a flow chart is that the way different operations are represented are standardised so that anyone who is familiar with the symbols can follow other people’s algorithms.

Prepare a set of flow chart symbols (boxes and arrows) using the templates.

Ask the class to research the meaning of the word ‘flowchart’ and then discuss their findings. The Wikipedia definition is:

“A flowchart is a type of diagram that represents an algorithm, workflow or process, showing the steps as boxes of various kinds, and their order by connecting them with arrows.”

Another way of explaining it is that a flowchart is a diagram that represents a solution to a problem.

Discuss with the class why it is a good idea to use flowcharts to represent their algorithms. (e.g clarity, ease of communication between people, shows the decisions that have to be made and the options available etc)

They are a useful way of planning how a computer program might work, and show others your thinking.
A flow chart shows the key points in an algorithm:

A sequence of many instructions that does not involve any of these key points may be represented as a single rectangular box.
Flow charts use a variety of standard flow chart symbols to represent different elements, and arrows to show the flow or direction. These shapes are formally agreed standards (British Standard BS4058). The most commonly used symbols are: 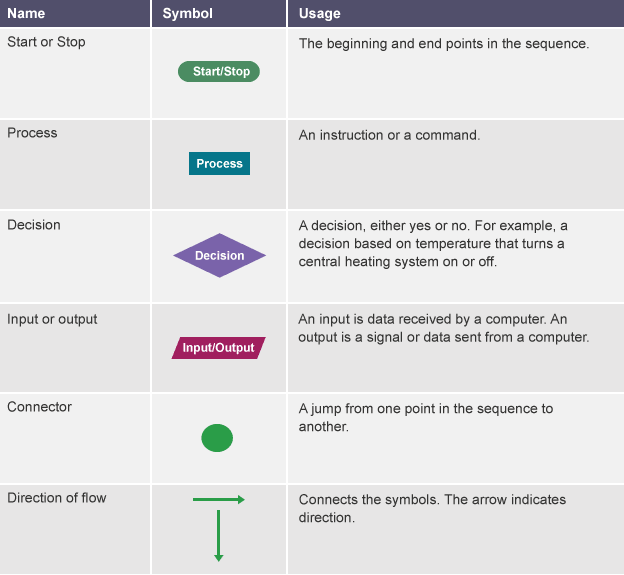 Activity 1: Identifying symbols and what they do

Use a simple algorithm the learners have already constructed (e.g making toast) and print out the individual steps.  Then, in groups, set out the rectangular ‘command’ flowchart blocks in a vertical column and lay the individual lines of instruction in the algorithm over each box. Then add the arrows.

Introduce the ‘start’ / ‘stop’ blocks and add them to the algorithm.

So after the command line ‘take the toast out of the toaster’, they may need a decision diamond asking ‘Is the toast burned?’  There could be two answers ‘Yes’ or ‘No’ or three answers ‘Yes’, ‘No’ and ‘A little bit’ (or ‘partially’ if they know the word).   Start with two answers.  Write the question (e.g is toast burned?) on a new card and lay it over the decision diamond.  Add two arrows to the decision diamond (typically from the points on the left and right. Label one arrow ‘yes’ and the other ‘no’. Put another command rectangle and the end of each arrow.  Let the children decide on the command they will put in each box.

Finally, whether the answer is ‘no’ or ‘yes’ (with the command ‘ throw it away’) they will need to work out at what point they rejoin their original algorithm!

Divide the children into groups and give each group a set of cards with the following scenarios.  Ask them to draw the flow chart that represents the algorithm.