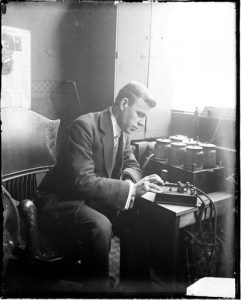 An unplugged lesson for KS2 finding out what a code is, different sorts of codes, how they work and why we use them. The lesson can be integrated with the history, geography, technology or maths curriculum.

Collect some examples of different codes and print and laminate them.  We used Egyptian hieroglyphics, a modern language that does not use the Roman alphabet, rune or ogam stones, semaphore and morse code.  We also added cards showing a computer programme written in Scratch (or Tynker) and in a text based language such as Python. All these are downloadable by clicking on the links.

Ask the class to use the web to find a definition of ‘a code’. This is what Wikipedia says.

“In communications and information processing, code is a system of rules to convert information—such as a letter, word, sound, image, or gesture—into another form or representation, sometimes shortened or secret, for communication through a channel or storage in a medium.”

Talk about why we have codes.  An early example is the invention of language which enabled a person, through speech, to communicate what he or she saw, heard, felt, or thought to others. But speech limits the range of communication to the distance a voice can carry, and limits the audience to those present when the speech is uttered. The invention of writing, which converted spoken language into visual symbols, extended the range of communication across space and time. 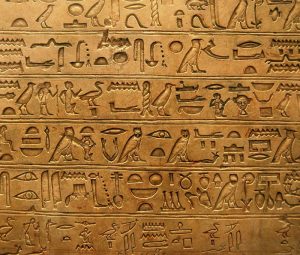 Look at the cards showing Egyptian hieroglyphics and talk about written languages based on pictures (pictograms).  An important point is that there is a direct relationship between the symbol and what it represents, even if the symbol has become stylised or simplified. Ask the children to write their name in hieroglyphics. If you have studied / are studying the Egyptians in history, so much the better. 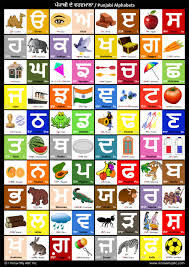 You can do the same activity with an Asian language such as Gujarati, Punjabi, Japanese, Chinese etc. This is especially interesting if you have children who are native speakers of those languages or you are studying those countries.

Look at some early examples of codes, such as Ogam or Rune stones and find out when they were used, who used them and what they were used for.  These are very different as there is no direct connection between the symbols and what they represent – like the Roman alphabet used in most Western countries, the symbol is totally arbitrary. 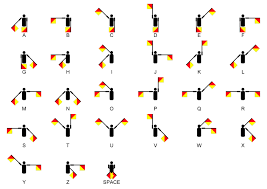 Show the class pictures of the semaphore alphabet and the morse code alphabet. There is a resource sheet you can download for more information.  Both of these were used by the armed forces, among others.  Ask the class why they needed both. When is semaphore more useful and when is morse more useful? How were they used during the war? (Clearly semaphore is useful when you can see the other person 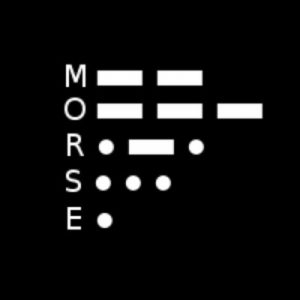 but they are too far away to hear you. Morse code is used to transmit messages using a series of buzzes but to transmit over any distance the signal relies on additional technology such as radio to carry the sound. Alternatively, Morse can be represented by flashes of light.  When would that be useful?)

The key learning point is that there is no ‘best’ code – particular codes are useful for some purposes.  It is exactly the same with computer codes – there is no best one. It depends on the situation and what the programme is for.

You could ask the class to make a list of programming languages (codes) and find out what they are used for. For example ‘Java’ is used to programme all Android apps, Python is simple and incredibly readable since it closely resembles the English language and is a great language for beginners etc.

Another fun video to watch shows a competition between a team of two morse code operators and a team of teenagers texting to see which team is the faster when transmitting and receiving  the same message.  It’s always fun to take ‘bets’ on the outcome.

Watch a clip showing how the German Enigma machine worked and how it was cracked by Alan Turing and the scientists at Bletchley Park.A

Use the template to print each letter of the alphabet in a row of boxes. Then using the same size boxes, print off numbers 1-26 (or however many letters in your alphabet). Cut out the strips and laminate them. Put the number strips under the letter strips so that ‘1’ is under ‘A’, 2 under ‘B’ and so on. Send a short message substituting the corresponding number for each letter. Clearly, this is not a very secure code. How could it be improved?  Let the children experiment by moving the numerical scale under the alphabetical scale so that ‘1’ no longer represents ‘A’.  Supposing they have moved the scale along 6 places.  How can they can communicate to the receiver how many squares they need to move the scale? Encourage them to think outside the box! Imagine they were spies or secret agents, how could they do it? Could they use a book? A newspaper? A piece of music? A poem? A visual cue?

There is another lesson ‘Finding out about codes (2)’ which shows how you can make a morse code buzzer and transmit messages. This is a great way of integrating coding with design and technology and with history (think radio operators in WWII!)