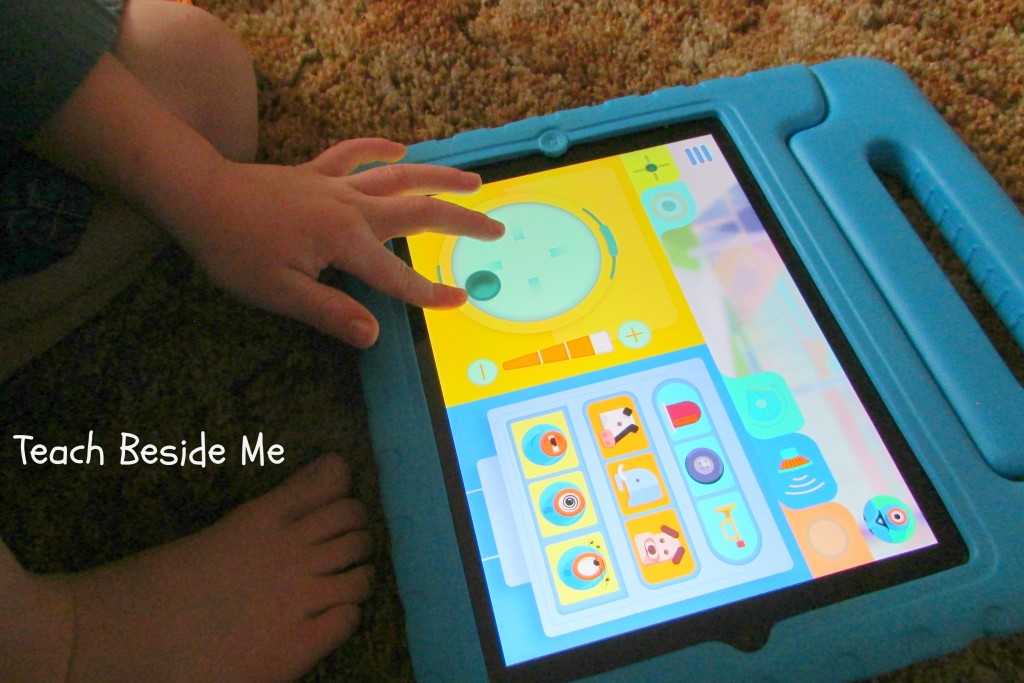 Dash and Dot are absolutely our favourite robots for use in a primary school.  They are expensive but worth every penny and we have always bought them on eBay for approximately 50% of the RRP for brand new ones.  Our cheapest was £80, the most expensive was £120. You just have to monitor eBay regularly and be prepared to wait until one comes up at the right price.  If you are prepared to go second hand, look at eBay about February time – there are lots of abandoned Christmas robots for sale!

Dash & Dot were created for ages 5-12 but we think the age range is more 4 – 9.  They connect wirelessly to apps that are downloaded onto mobile devices.   The apps then help you to program them to perform different functions.  They can do so many fun and silly things. They have sensors, programmable buttons, lights on various parts of the robot that flash different colours, speakers, accelerometers (activated when they bump into things) and gyroscopes (to turn around). You can also add accessories that enable them to do more things.  For example, you can use Lego connectors that clip onto the robot and allow you to build with Lego onto the robot. You can also fit a ‘snow plough’ to the front of Dash so that he can herd sheep / pile up cotton wool snow / demolish cardboard towers / chase a Beetbot and a whole lot more.  The add-on catapault arm means Dash can throw balls at targets and the Xylophone lets him play tunes that you have written in the Xylo app.

Dash and Dot charge with ordinary USB chargers and they hold their charge for a good hour’s worth of play even when they are in non-stop motion.

There are a few different apps available that work with Dash & Dot.

Go is the beginners app that help you explore what they can do.  In this app you can play around with the robots, learn their sounds and features and learn different fun ways to play with them. This app works sort of like a remote control joystick. You touch buttons on the screen and tilt and turn your device to make the robots react.  Most of the younger children love making Dash sound like a fire engine or making its light flash but the sensitivity of the ‘joystick’ control is sometimes too hard for little ones unless they are used to controlling mobile cars or similar. Path starts with beginner coding (for ages 5-7).  In this app you can draw a path to have them navigate around.   You can measure your room to plan a route in the free play section or play in different worlds to unlock new special effects. There is a farm, a race track and other fun places to visit. In these apps they learn sequencing, too.

Blockly is the most advanced app. and helps children learn to code using a block commands  that you drag and drop into a series that tells the robots what to do –  similar principle to Scratch but with less functionality and is an excellent ‘transition’ into Scratch.  You can add in sounds, lights, movement of different speeds and lengths, and more.  This is the most useful app in terms of longevity – kids will go on experimenting for years after they are bored with the other apps. In Blockly, we created a maze and children programmed Dash to move through it and find Dot. Here is a video of us maneuvering Dash through the maze. He almost made it!!

Wonder Workshop, the manufacturers of Dash and Dot, has  just launched a magazine. Check it out!  You can also find the Wonder Workshop on Facebook, Twitter, and YouTube. Their YouTube Channel is lots of fun!

We really cannot praise Dash and Dot enough. Even the price is not so horrifying when you realise how many year groups can make use of them. They are also extremely tough and childproof – we have a rule that you NEVER use the robots on a table – or even put them on a table as someone else might have a device that is controlling it. One group of 5 year old did just that and Dash went shooting off the table and landed with a bang on the floor.  one piece popped off and was easily clicked back on with no damage done.  In the same session the kids dressed up Dash with sticky stars and a wizard’s hat (our theme was ‘magic’), which can be easily unpeeled and the robots washed down with a damp cloth.

Hints
Some older tablets do not support the apps but there seems to be no rhyme nor reason to this.  For example, the school’s iPad 2s do not support Dash and Dot but I have several that do.
Wonder Workshop has a really annoying habit of upgrading the software on an almost hurly basis it seems. This just means you have to plug it into a power source whilst connected via blue tooth to your device (which in turn is connected to the internet) and it does it automatically in a few minutes.  However, it is worth checking this, every single time, 5 minutes before you use it.